This summer the Careful Painting crew scraped and painted a garage for John Tymoczko and Alison Unger at Fourth and Elm Streets. We also touched-up over at Wayne Carver’s house at 203 Maple.

Reed Whittemore lived in the house at Fourth and Elm during some of the years he taught English at Carleton College in Northfield. He edited the Carleton Miscellany in the attic above the garage that we repainted for John and Alison. According to Alison and Professor Carver there was a ladder up to the garret which Professor Whittemore would pull up when he didn’t want to be disturbed in his writing and editing.

Here is a poem that Reed Whittemore wrote about the house at 319 Elm Street in Northfield, Minnesota, relevant as ever….

The Farmhouse
Our house is an old farmhouse, whose properties
The town has gradually purchased, leaving it
Only a city lot and a few trees
Of all that wood and busheldom, and breeze
It once served. It is high and square,
And its lines, such as they were, have been muddled by several
Conflicting remodlers, whose care
In widening, lenghtening, and adding on, letting in air
Has left it with four kinds of windows, three porches
And a door that leads to a closet that is not there.
The city houses around us have borrowed from verse
And the Old Dominion; their cosmopolitan
Muddle is elegant next to ours.
We think of moving, and say we’ll add no more dollars
To those already spent making a box
Of what was, is, and will be, forever, a box,
When there’s land, empty and unboxed, down a few blocks
Waiting.
We say this as we pull down, pull up, push out,
And generally preserveserve with our renovating–
That is–making new again–knowing
That houses like our house are not made new again
Any more that a man is. All that growing
Up and away from the land, that bowing
To impersonal social forces that transform
Wheat fields into rows of two-bedroom ramblers
Must be acknowledged; but the warm
Part of our country boy will not conform.
It remains, behind new windows, doors and porches,
Hugging its childhood, staying down on the farm. 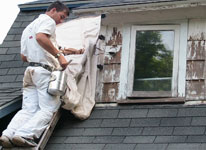