After graduating from Stillwater High School in 1979 I sought work in Minneapolis for the summer. My cousin Jim Grathwol and I found employment in the roofing trade until our employer walked off a roof. I returned to Stillwater and was hired by Marv Richert of Richert Decorating. Later I worked for the Cub Foods painting crew, for Chandler Exhibits, and for Bill Weed in Northfield.

My partner Peter Henry enjoyed discussing the finer points while hanging from gutters, swatting bees, and painting windows in Northfield and the St. Croix Valley for several months over the course of two summers. Peter succumbed to an allergy to alkyd paints and moved on into a successful career in education. He is remembered today for his Plymouth Fury–a former police car–which we used to haul our forty-foot ladder.

Another friend, Matthias Vogel (seated in front of the Fury), shared these pictures from 1982 when we reunited at his house in Neunkirchen, Germany in July of 2017. My brother David is in the upper right corner: 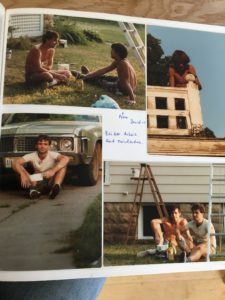